British Judo Association Grading System
The belt system is a distinctive feature of Judo. Promotion within the Mon and Kyu grades is based on technical ability, knowledge and understanding, together with Japanese terminology and supplementary knowledge. There is no contest requirement but it is expected that the judoka follows a recommended randori and contest program as illustrated in the syllabus and has attained appropriate levels of achievement for each colour belt.
​
The Junior Judoka should be able to complete the Mon grade syllabus and attain the grade of 18th Mon by the age of 18 with regular training. While the senior judoka should be able to complete the Kyu syllabus and attain the grade of 1st Kyu in approximately five years.
For grades up to and including 18th Mon / 1st Kyu (Brown Belt) gradings are completed within the our club with either John Debono or Mike Allen completing the examination.
​About a month before the grading we will provide each person with the information that is required for their grading. In the sessions leading up to the grading we will cover the techniques in groups, making sure that all participants understand everything for the grading.
Grading  Examination Charges ​Mon and Kys grading Charges include the  BJA registration fee. Sho grading charge includes a free belt.
Please ensure that your BJA membership is kept in date, if this expires you are ineligible for gradings, remember to bring your BJA record book to club gradings.
SHO Grading Under 8 Years Old ​
For players aged 5-7 years old, Ford Judo Club will now be grading under the BJA Sho grade scheme.
However, we feel that the Kai grade Syllabus that the club has been following previously, allows the players to display their knowledge of a judo technique at each grade (Sho system does not) and therefore adds more ‘value’ to their achievement.
​
For those players that have already begun the club Kai grade route, they will simply move to the next appropriate Sho grade, for example 3rd kai will be graded to 4th Sho. When the players reach eight years of age, they will revert back to their red belts and continue along the BJA mon grade route.
Promotion on the Sho Grade Syllabus is based on agility, balance, co-ordination & knowledge of Judo techniques & Judo terminology. Players achievements however, are recorded at the BJA in the same way as mon and kyu grades. Players will be selected to be graded depending on age, ability, attendance, date last graded, and behaviour on the mat.

British Judo Mon Grade System
The Mon Grades system is a distinctive feature of judo with promotion to different coloured belts based on technical ability, knowledge and understanding as well as supplementary knowledge of Japanese terminology. Although there is no contest requirement in the Mon Grade system there is a progressively structured randori element at the higher grades.
​
The Mon Grade system is aimed at 8- to 17-year-olds and follows on from the Sho Awards. With regular study and training, a judoka should be able to complete the Mon Grade syllabus by the age of 17. In some cases when the judoka is particularly dedicated, they may complete it as early as 15 years of age 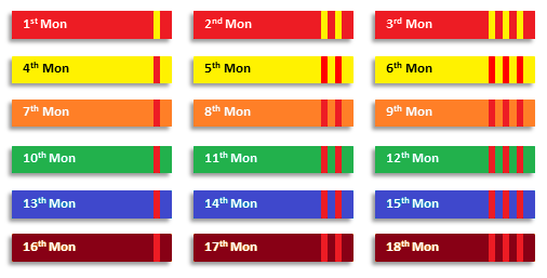 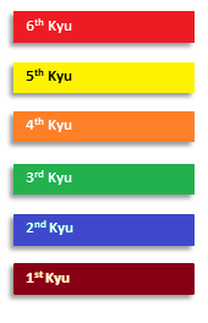 British Judo Dan Grade System
The Dan Grades system is a distinctive feature of judo with promotion to different ranks based on a variety of different pathways and achievements. Obtaining a Dan Grade is one of the highest qualifications available to individuals involved in the sport of judo.
​
The Dan Grade system is aimed judoka who are 15 years of age and older who have moved on from completing the Kyu Grade system. Judoka test their ability, by entering for an examination within the Dan Grade system. For that examination players are required to demonstrate superiority over a cross-section of other players competing at the same level. This ensures that successive Dan Grades up to 5th Dan are populated by increasingly skilful players.