Club gradings are held twice a year, by invitation for Ford judo club members only.
Candidates will be invited to grade once they have reached the desired technical ability.

The coaches will consider a variety of things before members receive their invite to grade, for example,Promotion within the Mon grades is based on technical knowledge and understanding, together with Japanese terminology and supplementary knowledge. There is no contest requirement in the Mon Grade syllabus. However, there is a progressively structured Randori element at the higher grades.
Players following the recommended BJA competition pathway will normally expect to be graded twice a year, those that are not, will normally expect to grade once a year. In both scenarios, the welfare of the player is paramount, and the coach’s discretion may mean that a player may postpone a grading to build up their competency level, or could be invited to grade outside of the official club gradings to advance more quickly to a level that they are regularly performing at.

(To elaborate, this ensures those following the competition pathway will have a reasonable amount of competition experience in readiness to compete for their 1st Dan, whilst those that have not followed the competition pathway, will have more time to decide if they want to compete at some lower level competitions, in order to get some valuable experience prior to grading to brown belt and subsequently competing for their 1st Dan.)
During the grading examination, all judoka will be required to demonstrate their required knowledge of the BJA Grading syllabus, as well as display the techniques during light randori. They WILL also be tested on techniques from previous gradings. Two weeks prior to the grading, the coaches will allocate time to go through the syllabus requirements for each player. Resources are also available online, and within the Dojo. The coaches are happy to assist and to discuss any issues, however, at the end of the day, we have the interests of the players and the club at heart.

NOTE: this only applies to juniors aged 8-16 years of age 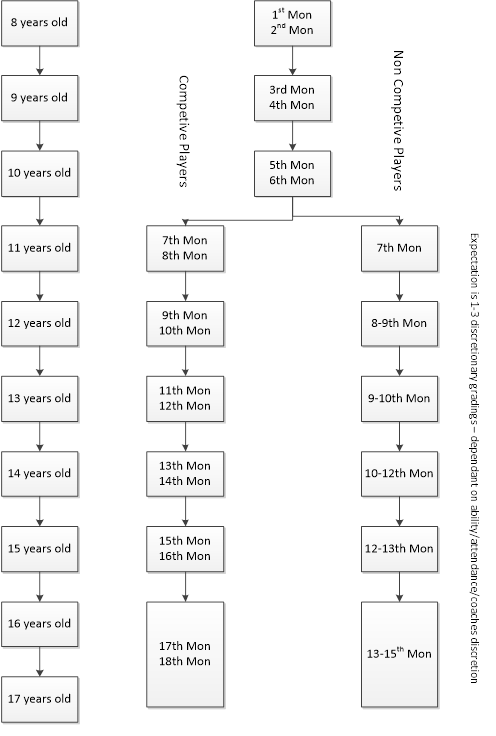 To grade, players must have their own full Judo Gi, and a valid (in date) BJA licence. Full payment must be made in advance of the date of the grading.
Players who fail a grading, will be invited to regrade a month later, to allow more time to learn/practice the syllabus
If the regrade is also failed, then the next attempt will be at the next official club grading and any fee paid will be refunded
​